Hello everyone! Post-long weekend blueeees, and today the countdown from work is down to 5 days 😦 Sob sob. Hope everyone had a super good and fulfiling hari raya weekend! 🙂 Will be updating on our road trip to Kuantan, Pahang, Malaysia! So do look out for it!

Today, I will be recounting day 3 of our korea trip! 🙂 I realised writing these experiences down really helps me think back and evoke very happy memories made 🙂

We woke up at a quite natural timing today because we were so tired!!! Since our itinerary for today wasn’t packed, we decided to sleep in a little and only left at around 9.30am.

But they are also crazy expensive in singapore. So when I realised we are still in season for strawberry picking I jumped at it!

We went in mid june which is the end of the strawberry season. The best and sweetest strawberries are during winter-spring time 🙂

We took the super long MRT journey to Yangsu station from Chungmuro and the trip took a total of…. 2 hours! Poor YL had to stand the whole way there and back 😦 [4 hours]

We had to catch a cab to the strawberry farm when we arrived and it cost 3700W from the MRT station!

Just go straight in and tell the ahjumma you bought your coupon for strawberry picking! (She didn’t even check the voucher I printed out LOL). For us, I pre-booked our strawberry picking online prior to the trip from Koreal as I really wanted to do this activity! We paid 32SGD for 500g each of strawberry picking! The friendly owner gave us each a plastic box and told us to fill as many strawberries as we can. She also apologised that her strawberries are not the best at this time (June) as it is towards the end of the season.

Off we went to grab as many strawberries as we could! 😀 (we ate some along the way as well although it is not recommended as you should wash first!) 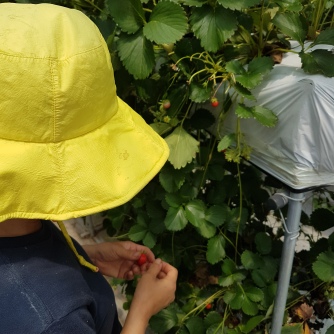 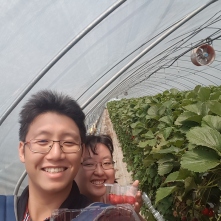 Before we started, we were led into a tent with rows and rows of strawberries! The good thing about this farm compared to the rest is that there are top and bottom rows and so kids can have a great time picking the bottom row too!

The friendly owner advised us not to pluck any flowers as it will attract bees! The bees were aplenty but they are quite harmless and generally mind their own business.. The size of the bees are also around that of a small housefly in Singapore, so it wasn’t super scary!

Off we went to pick strawberries and after we were done, the nice ahjumma helped us wash the ones we wanted to eat on the spot 😀 It was so sweet!!!!!! Although she repeatedly apologised for the small size of the strawberries, the strawberries we picked were already way way bigger than the tiny ones we buy from Singapore! (now we know!)

We chose to walk back to the MRT station after the strawberry picking experience because there was no taxi near the farm and also because we wanted to look around the town! It is actually really different from Seoul city itself and had a very chill feeling. 🙂 The air was really fresh too!

Our next stop was the Ewha Women’s university! Partly because I heard things are cheaper there and the university itself is really pretty! 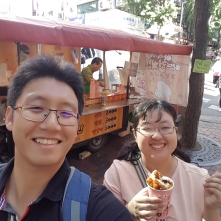 We then went around the food stalls to eat some street food including Herb Fried Chicken, Egg bread, and Odeng (my favourite 😀 😀 :D)

We also went to the university which was omg, so pretty!!!!! Like it was really super pretty. If only NUS looked like that… Many people were sitting along the stairs to just have a drink or eat some street food.

If you do need a restroom or want to buy some drinks from GS25 (my favourite convenience store :D), you can enter via Entrance 4 along the doors leading to the stairs as that is the only one open for visitors. There’s also a water cooler inside! 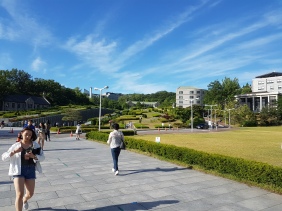 I didn’t do much shopping on the streets as we didn’t venture into the side alleys but the styles in Ewha was quite nice and simple! Instead, I went to the MRT shops where they had 5000W-10000W clothes on sale and bought quite alot 😀

After dropping our strawberries and resting a little bit in the hotel, we caught the shuttle bus to go to N Seoul Tower! Our aim was to catch the sunset there so that we can see both the daytime view and night view!

There are quite a few ways to get up to the base of N Seoul Tower, so based on my research, just sharing:

2. Take the cable car up (this is the option we took)

We took the hotel shuttle to Myeongdong and walked towards pacific hotel to find the Namsan Oreumi (a free elevator to get you up to the cable car!). We could have walked to the Namsan cable car directly but I wanted to try the free elevator. Click here for directions to Namsan Oreumi. We got quite lost as we walked on the steep uphill towards the Namsan Tunnel #3 (which is where you should walk towards to get to the Oreumi) but we asked around and with YL’s awesome navigation skills we managed to not walk all the way up to the cable car station (LOL).

The view after Oreumi ride

So after queueing for about 15 minutes for the Oreumi ride, we got to the cable car station and was horrified that the waiting time was 90 minutes!!!

I was like omgosh…. But.. we still queue-ed in the end. Sigh, and hence we missed the sunset! The cable car ride was terrible because you basically squeeze in an elevator with a ton of other people (like sardines) and get transported up. Lucky for us, we were the first few to enter and so we managed to get some good views!

After you reached the cable car station on top, you still need to climb a flight of steps (quite long) to get to the actual base base of N Seoul tower. The weather was super super good and cooling 🙂 Do bring along jackets!

Then we got off to exploring! There was ALOT of people on the day we went as it was a weekend evening. Many couples were just enjoying their time sitting at the benches, etc. There is also a shopping mall at the N Seoul Tower base which houses quite a few restaurants, cafes, and even an arcade!! 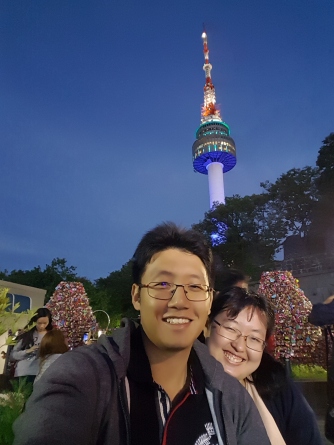 We then saw the lovers’ locks (sorry I can’t seem to find photos of it!)!! So many of them everywhere! There are shops selling the locks for like 8000W or something. We are not fans of locking our love anywhere but our hearts (for free LOL) so we didn’t put any lock! (We didn’t even do that in Paris). But we did still take some lovey dovey photos! Heehee.

After we admired the view from the base of N Seoul tower, we headed into the mall to explore and we found a super cool arcade machine that lets you shoot pellets from rifles for just 1000W (many shots)

We made the decision not to go up to the observatory of N Seoul Tower because we didn’t find the additional height adding to the already very pretty night view. But, if you do want to go up to the observatory, you can buy tickets on the spot or you can just purchase it online (Klook, Koreal, Trazy, etc.) to skip the queue (if there is one!). It costs around 9SGD per person. 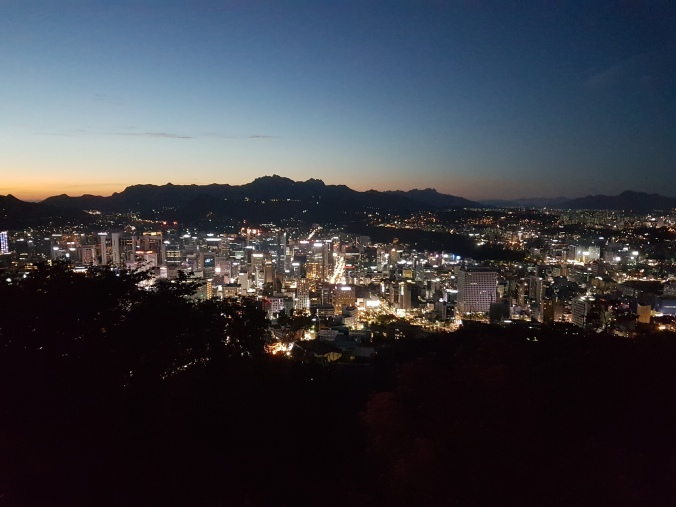 We then queued up to go down N Seoul Tower via cable car and headed to Myeongdong!

By the time we reached Myeongdong, it was close to 11.30pm and most shops were closing up! We decided to have dinner at the famous Kang Ho Dong Baekjeong Korean BBQ which is reportedly opened by Kang Ho Dong (a celebrity). The reason why we ate there was because this is the few bbq places which uses charcoal instead of gas to cook the bbq meat! 😀 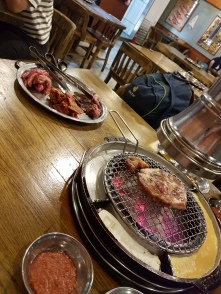 We were really hungry and we ordered the premium menu which had more meat and we could refill our egg! 😀 The staff actually made our 2nd portion of egg into kimchi egg by adding kimchi into it.

The right-most was the best spicy cold noodles I ate in Korea! 😀 Super super springy and the sauce was flavourful despite being spicy. Even a non-spicy eater like YL wanted to order one more.

We actually put the address into our google maps and followed google to find it! It is within the Myeongdong shops so don’t worry!

The meat was flavourful and the pork shoulder was super soft! Although towards the end, our meat was a bit more charred than our liking but I do understand that by the end of the meal, the charcoal was super hot and I guess it was harder to cook the meat to perfection.

After that, we just went to shop at GS25 (again) HAHA and took our hotel shuttle back!